In 2017, six years after the start of the Circle of Life Endowment Fund, we had sufficient money to make a contribution to our community. Cathy Auld, Director of Strategic Philanthropy at the Winnipeg Foundation, contacted us. She had found a great match for our mission – the Grandma and Grandpa Swim Program. We discovered that this program, an initiative of the North Centennial Seniors Association (NCSA), had been operating successfully for almost 35 years.

We were invited to attend the Annual Celebration of the Winnipeg Foundation to share our venture with the Grandma and Grandpa Swim Program. The event was held on January 10, 2018 at the Neeginan Centre, which is a non-profit adult learning environment designed to provide programming for Aboriginal adults. It is housed in the grand, Beaux-Arts style building that began life in 1905 as the home of the CPR station. More than 300 people braved that bitterly cold night to attend the function.

Barry and I spoke briefly about our involvement with the program. From the podium we could see the enthusiastic face of Laura Isbister, treasurer of the North Centennial Seniors Association of Winnipeg (NCSA). This was our first encounter with anyone from the program, but not the last. 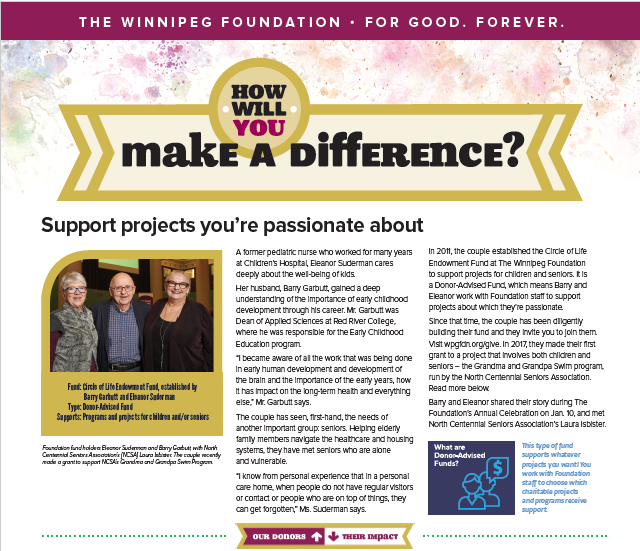 Winnipeg Foundation news release about the Circle of Life Endowment Fund and the Grandma and Grandpa Swim Program.

Our First Trip to the Program 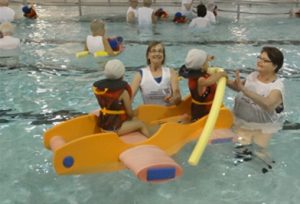 Children and seniors enjoying each other in the pool.

Our second encounter with the program a few weeks later on January 30, 2018, was a visit to the North Centennial Pool at North Centennial Recreation and Leisure Facility (renamed to Sergeant Tommy Prince Place). That Tuesday was another bitterly cold day, but it was also snowy and windy. Barry and I had planned to join Cathy Auld to see for ourselves what happens in the North Centennial Seniors Association’s Grandma and Grandpa Swim Program.  We questioned whether the pre-schoolers and seniors could safely venture out on such a blustery day. I called Laura Isbister to check if the program would run that morning. “Oh yes,” she said. “As long as the buses are running, the children will come.” “But what about the seniors?” I thought. We decided that if they could go, so could we. 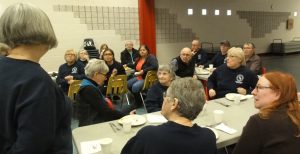 Eleanor and Barry visit with the swim program volunteers along with Cathy Auld (far right).

We arrived at the pool in time to observe the first group of children laughing and splashing with their ‘grandmas’ and ‘grandpas’ in the pool.  It was clear that the children had safely arrived and so had most of the ‘grandparents’! The second group of children waited on the pool deck until it was their turn to leap into the arms of their waiting partners. We watched as the children and ‘grandparents’ played happily together in the water.

We stayed for lunch and met some of the volunteers and heard some of their stories. We experienced the camaraderie and the sense of community in the group. We felt the enthusiasm and the energy in the room. We saw that day that it takes special people to volunteer in the Grandma and Grandpa Swim Program.

About the Grandma and Grandpa Swim Program 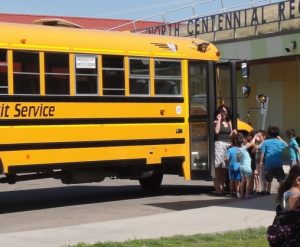 The NCSA has been offering the Grandma and Grandpa Swim Program for over 35 years. It was started in 1983 by a City of Winnipeg employee, Bernice Feledechuk, who eventually became president of the NCSA. Every Tuesday morning children from inner city daycares are bussed to the North Centennial Pool where they have fun time in the water with caring seniors. The City of Winnipeg provides the pool and lifeguards. Seniors from around the city volunteer their time. The Moffat Family and the Gray Family Funds fund the buses, and the Circle of Life Endowment Fund funds social events like the annual Christmas party, including presents, and spring carnival. 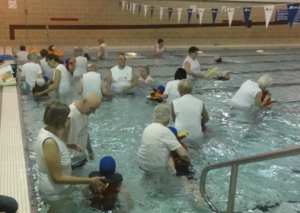 The Grandma and Grandpa Swim program meets some of the physical, social, and emotional needs at both ends of life’s spectrum. It would not be possible without the vision, work, and dedication of the volunteers of this award winning program. We salute the North Centennial Seniors Association president Bernice Feledechuk, the swim program co-ordinator, Barbara Morris, and all the many volunteers. We especially thank Laura Isbister who has been our communication channel with the program. 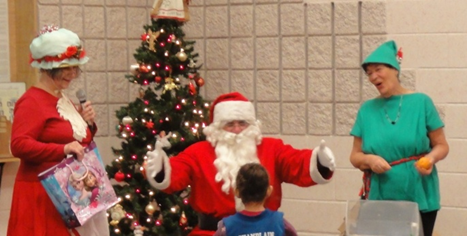 A Christmas Party with the children. 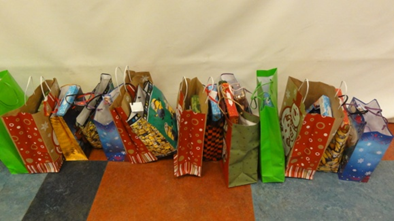 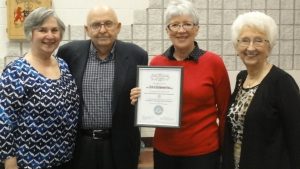 November 22, 2018 was the occasion of the Grandma and Grandpa Swim Program volunteer thank you luncheon to celebrate the 35th anniversary of the program. Past and present volunteers enjoyed a delicious luncheon along with community representatives. We met more of the amazing volunteers and were presented with a certificate thanking us for our involvement with the program.

Future of the program

It was a sad time in the spring of 2020 when the pandemic struck and the program came to a halt along with so many programs and services in the city, across Canada, and around the world. Although the program was on hold the Grandmas and Grandpas continued to knit and to purchase presents for the children for Christmas.