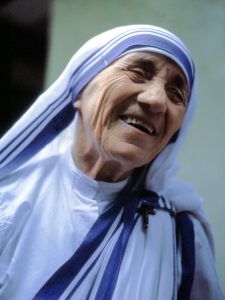 Mother Teresa in the religious house of San Gregorio in Rome, 1985

“If I ever become a Saint–I will surely be one of ‘darkness’. I will continually be absent from Heaven—to light the light of those in darkness on earth—”, Mother Teresa of Calcutta.

Mother Teresa, Agnes, was born in Skopje, Macedonia on August 26, 1910. She would die 87 years later in Kolkata (Calcutta, India) on September 5, 1997. Her father was Nikolle and her mother Dranafile Bojaxhiu. She had two siblings, Lazar and Aga. Her family was devoutly Catholic.

Mother Teresa’s father, Nikolle, was murdered for political reasons when she was 9 years of age. Gezim Alpion, Birmingham University, believes Mother Teresa’s life course was established by this tragic happening. He says “her father’s poisoning by Slavic nationalists in 1919 marked the beginning of Mother Teresa’s attempts to replace him with a divine father-Jesus-and the start of her lifelong doubts about the existence of God”. Also, from 1919-1922 she lost 8 very close relatives, including the only uncle she had.

The family was of Indian descent. Together with the tragedies, other influences on her life included her father’s entrepreneurial bent and her mother’s spiritual and religious nature. Dranafile was a loving mother who raised her children with love, care and affection and “instilled in Agnes a deep commitment to charity”.

At 18, Agnes left home, never to return, and joined the Institute of the Blessed Mary Virgin, also called the Sisters of Loreto, in Ireland. Here she was called Sister Mary Teresa. In 1929 she went to India to teach at St. Teresa’s School in Darjeeling, West Bengal. In 1931 she took her first religious vows and went to teach at St. Mary’s School in Calcutta.

“Six years later, on May 24, 1937, she took her Final Profession of Vows and with that acquired the name, which the world recognizes her with today, Mother Teresa.” She taught at St. Mary’s School for 20 years, becoming Principal in 1944. She loved teaching and was deeply affected by the poverty and misery in Calcutta.

In the fall of 1946, while on an annual retreat to Darjeeling, she experienced a call from the almighty “to fulfill his heartfelt desire of serving the ‘poorest of the poor’”.

In January of 1948 she received approval to establish a new religious community, Missionaries of Charity Sisters, which was dedicated to serving the ‘poorest of the poor’ in the slums of Calcutta. She began her mission on August 17, 1948 when she first entered the slums of Calcutta. She was soon joined by volunteers; most of them were former students and teachers. She established a school, a home for the dying and destitute and in 1950 a congregation that became known as “Missionaries of Charity”. This congregation grew in numbers and in financial terms as well.

In 1952 she established the first “Home for the Dying” open to all faiths and ensuring that everyone would pass in dignity. By 1960 she had established several hospices, orphanages and leper houses all over India. In 1963 Missionaries of Charity Brothers was formed. In the 1970’s and 1980’s many complimentary societies and groups of co-workers were formed.

In 1965, with five sisters, the first expansion of the order outside of India took place to Venezuela. Then new “houses” were established in Rome, Tanzania and Austria. Further growth of the order to Asia, Africa, Europe and the United States happened in the 1970’s. “In 1982 Mother Teresa, with the help of Red Cross volunteers, rescued 37 children who were trapped in a front line hospital in Beirut. At this point Mother Teresa was 72 years old.

At the age of 81 Mother Teresa returned to her homeland for the first time since 1937 and established a Missionaries of Charity Brothers home in Tirana, Albania.

At the age of 87 the “Missionaries of Charity had almost 4000 sisters working in 610 foundations, in 450 centres in 123 countries across the six continents.” There were hospices, homes for people with HIV/Aids, soup kitchens, children’s and family counselling programs, orphanages and schools.

She was recognized with many awards by India. In 1971 she was awarded the first Pope John XXIII Peace prize for her work with the poor, display of Christian charity and efforts for peace.” In 1979 Mother Teresa was “awarded the Nobel Peace Prize, for work undertaken in the struggle to overcome poverty and distress, which also constitutes a threat to peace“.

In 1983, while visiting Pope John Paul II in Rome, Mother Teresa had a heart attack. Eventually she had heart surgery; but her health continued to decline. She stepped down as the head of the order at the age of 87, in March of 1997. She passed on September 5, 1997.

In 2003 Pope John Paul II beautified Mother Teresa at St. Peter’s Basilica in Vatican City. Afterwards she was known as Blessed Mother Teresa. She was canonized on September 4, 2016 and is now known as Saint Teresa of Calcutta.

Mother Teresa had to work extra hard to gain approval for her “Missionaries of Charity” from the male hierarchy of the Church. After its formation she often spoke of the religious emptiness, or darkness, she felt. I wonder if the lack of support for her work and the work of the sisters of the order, are at the heart of her emptiness. “Jesus has a very special love for you. As for me, the silence and the emptiness is so great that I look and do not see, listen and do not hear.” (Mother Teresa to the Rev. Michael Van Der Peet, September 1979.)