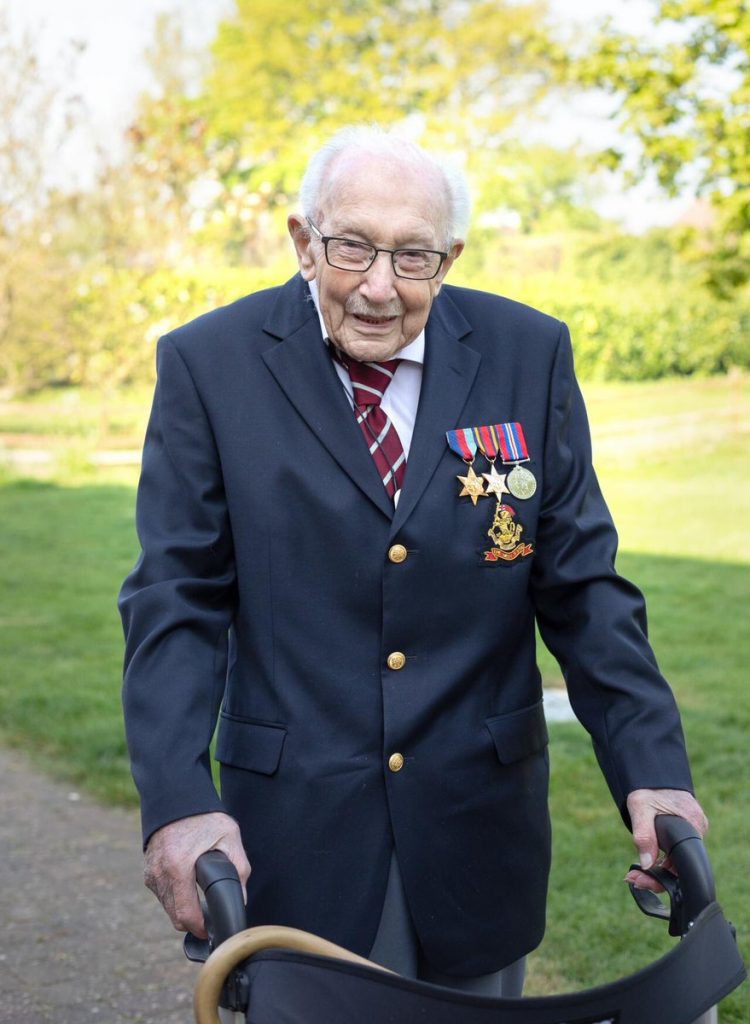 On New Year’s Eve 2021, the skies above London, England lit up with fireworks and an amazing drone display. The spectacle highlighted key moments from the year in which the Covid pandemic changed the world. Among them was a configuration of lit up drones featuring a man leaning on a walker; his right fist lifted in triumph. That man was Captain Sir Tom Moore.

In the week before his birthday, cards from around the world flooded into his community in Bedfordshire, north of London. There were 150,000 cards! The Royal Mail was overwhelmed and introduced dedicated sorting facilities to manage them. Twenty volunteers were recruited to open and display the cards in the Bedford School. Captain Tom’s birthday was marked by flypasts by the Royal Airforce and the British Army over his home in the village of Marston Moretaine.

In July 2020 Captain Tom was invested as a Knight Bachelor by Queen Elizabeth II. The ceremony took place outside in the quadrangle in Windsor Castle. The Queen used a long sword belonging to her father George VI in the knighting ceremony, thus ensuring that they would be appropriately socially distanced.

It was a BIG year for Captain Sir Tom Moore. Among the many honours he received was becoming the first member and captain of the Football Association and England National Football Team’s Lionhearts squad. He received the BBC Sports Personality of the Year award.

In September he published his autobiography Tomorrow Will Be a Good Day. He accompanied this with a children’s version of his story called One Hundred Steps.

Tom Moore was born in Yorkshire on April 30, 1920, the grandson of a stone mason who started a successful building company. Reportedly Tom had a happy childhood. As a young man he completed an apprenticeship in civil engineering and then, in the early months of World War II, he was drafted into the army. He was selected for officer training and rose to the rank of Captain, serving in India, Burma and Sumatra. After the war he worked in the family business and later for building materials companies, first as a travelling salesman and eventually a company director.

Tom had an interest in motorcycles. As a young teenager he bought and repaired a motorcycle. He raced motorcycles competitively, winning several trophies. He was married twice and had two daughters by his second wife Pamela, who died in 2006.

Taking up the Challenge

In 2018, at age 98, Captain Tom had a bad fall which resulted in a broken hip, a broken rib, a punctured lung, and other serious injuries. He survived but would no longer be driving his car. He did however recover and regain mobility using a walker.

In early April 2020, during a barbecue in the back yard of the Old Rectory where he lived with his youngest daughter Hannah, her husband and their two children, his family challenged Captain Tom to walk the entire length of their 25-metre driveway. When he made it to the end, his son-in-law encouraged him to keep going. He offered to pay one pound for every lap and suggested a goal of 100 laps by Captain Tom’s 100th birthday. The goal was to raise £1000 for the NHS which had helped him recover from his injuries.

Thus, on April 6th, Captain Tom began a fundraising campaign for NHS Charities Together, a group of charities supporting staff, volunteers and patients in the British NHS. On April 16 he achieved his target of walking 10 lengths per day for 10 days. On his final walk, his success was heralded by an honour guard from the 1st Battalion of the Yorkshire regiment flanking the driveway. Captain Tom captured the attention of his countrymen and indeed, the world. By his birthday on April 30, he had raised almost £33 million.

After a momentous year, Captain Tom Moore died on February 2, 2021 of Covid-19. In his centennial year he had become the holder of two Guinness World Records. One was as the oldest person to have a number 1 single on the UK music charts. His greater achievement was being the fundraiser raising the greatest amount of money in an individual charity walk.

The funds he raised went to NHS staff, patients, families, and community groups. For staff there were enhanced, comfortable rest areas with food and drink. Counselling services and helplines to support mental health were provided. For hospital patients, devices such as iPads were supplied to enable contact with family members. Bereavement support services were provided for families. Other funds supported hospices, community healthcare and social care, so patients returning home had access to the care they needed to recover.

Captain Tom was a source of inspiration to many. Young and old took up their own challenges to raise funds. His book, Tomorrow will be a Good Day, speaks to the “can-do” spirit of this man in his 100th year!

Note: This piece was compiled from information on Wikipedia, in the Winnipeg Free Press and British media sources such as the Associated Press, The Telegraph, and Wales Online